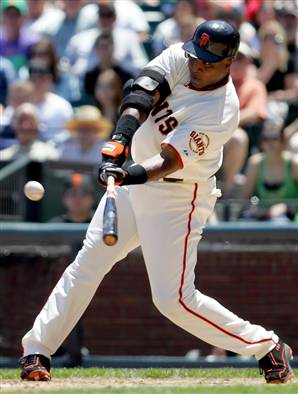 The camera followed the pitcher, one Mike Bacsik, during pre-game warm-ups. As he executed a rather goofy-looking drill that involved swinging his arms out from his sides and rotating his hips while running sideways, I knew that tonight would be the night. Bacsik looked eminently the part of someone who later that evening would serve up one of the most historic home runs in baseball history, number 756 in the intriguing career of Barry Bonds. Because of the scrutiny and borderline hysteria surrounding this accomplishment, and because of my many years as a devoted fan of baseball, I feel inclined to comment on the event. My first suggestion is that 99% of what you hear from me or anyone else right about now will be rendered pointless in due course. Most are speaking from overriding emotion or a lack of information. I will at least admit to doing this up front. And as I watched the game between the Giants and Nationals last night on ESPN2, my thoughts ran the gamut.

My favorite player of all time is Dale Murphy, the former Atlanta Braves star. Dale was my hero in the late 80’s, toiling for a then-wretched team that happened to have most of its struggles televised every other night on TBS. Dale is quite revered in baseball circles for being a man of unrivaled class and dignity, not to mention his fantastic ability when he was a player. He has removed himself from the limelight since his retirement over a decade ago, so it was a major surprise that during the Giants game the announcers relayed an extended quote attributed to Murphy in the Salt Lake Tribune, wherein he provided his thoughts about Bonds. Simply put, Murphy was quite harsh, calling Bonds out as a bad teammate and a cheater who used steroids to assist him in breaking the most hallowed record in sports—the career home run record once held by Hank Aaron. Of course this accusation is the one that Bonds has faced regularly since he broke the single-season home run record in 2001 and continued to pile up bomb after bomb thereafter, all the while looking quite a bit bulkier than we remembered him in the early 90’s. Murphy’s comments gave me pause, since I greatly admire him as a player and a person, and thus respect his opinions highly when he chooses to offer them. But ultimately I do see things a bit differently.

When I saw Bonds connect for the record-breaker last night, I felt a considerable sense of excitement. Bonds has been the greatest player of my generation, and I have thoroughly enjoyed watching him play the game of baseball at a level beyond elite. I will also admit to a fascination with his personality and his willingness to alienate himself from the media, who often are far too self-righteous and judgmental for their own good. I do not endorse everything Bonds says or does, but I could say this about everyone, even my hero Dale Murphy (although that might require serious effort). I do appreciate players—and people in general—who show a genuine passion about things that are important to them, and over the years I have seen that passion from Bonds. His wife and three kids clearly adore him, and that fact ranks foremost on my list of his admirable qualities. Whatever we find out later about his steroid use (for at present we do not truly know anything), we need to respect his love and commitment towards his family. I have seen several interviews where Bonds becomes emotional when speaking about his family, his teammates, or the fans in San Fransisco who have supported him for years. That resonates with me.

So what do I make of the steroid allegations? Frankly on my list of evils that men perpetrate against society, using steroids probably wouldn’t crack the top 100. While I would never use them or condone their use, I cannot say that my opinion of Bonds would drastically decrease if I found out that he took them. Instead I would probably wonder why he risked his long-term health, because the issue of steroids eventually boils down to one thing: side effects. If steroids were free of side effects and thus legal, they would be sold at every GNC by now, and probably most athletes would be using them. Then the only debate to consider would be the extent to which modern players have an advantage over the players of yesteryear for whom steroids were unavailable, and the impact of that perceived advantage on the record books. I have never been fully convinced by the argument that players are “cheating the game” by using steroids. Players do not—indeed they cannot—change the rules of the game simply by becoming stronger. Becoming stronger is a goal of any athlete. But they still need to go out and display the abilities relevant to their chosen sport. Using steroids without a prescription is illegal solely because of their extreme health risks, and steps were taken to outlaw them only as recently as the late 80’s, after which sports leagues proceeded to ban their use, Major League Baseball doing so much later than others.

Two factors need to be minded in this debate. The first is that steroid use in baseball is just the latest form of “cheating” that has riled sports writers across the country. Each generation has had its share of problems, and I would argue that steroid use is one of the lesser assaults on the actual integrity of the sport. More serious offenses that have plagued the game include gambling and bribery, mainly in the early 1900’s but here and there since. Baseball has also enjoyed a long and storied tradition of players’ attempts at gaining a competitive edge via the use of sandpaper, pine tar, stealing signs, and phantom tags, among others. MLB was also segregated until 1947, so who’s to say whether a black player could not have given Babe Ruth a run for his money on several of his records, or whether Ruth would have had quite as much success if he had had to face the best black pitchers of that day? Personally I feel the Babe might still have been regarded as history’s best player, but my point is that if you want to slap asterisks on Barry’s records, you may as well dole some out to Ruth’s as well.

The second factor we need to remember is that a few decades from now, we will probably view this situation quite differently. I would not be surprised if by that time a “safe steroid” exists that professional athletes will be allowed to use freely to become as strong as they can. Then will we be able to accuse them of cheating? Might we then look back with less chagrin at the accomplishments of Bonds, McGwire, Sosa, and others who have been accused of using strength-enhancing drugs? Did they really disrespect the game of baseball, or did they simply want to become more effective players? Did we as fans enjoy the show? Heck yeah, we did. The celebrations of 1998’s single-season home run chase have now turned into holier-than-thou indignation, and I have a hard time stomaching that. We should not allow the fervor of zeitgeist to sway our emotions so easily. Bonds seems more like a scapegoat right now than a true criminal—many have had a longstanding dislike of him simply because of his aforementioned bouts of impoliteness with the media, so they are merely using the steroid accusations as another excuse to pile on someone they regard as the proverbial spoiled athlete. But as I said before, Bonds has shown an emotional side of himself—the human side that we can all identify with—on a number of occasions, and when I assess his overall worth as a fellow human being, I choose to stand with him, not against him. With all due respect to the living legend himself, Dale Murphy, while you will always be my favorite player, I have to believe that time will bring more clarity to the career of Barry Bonds, and someday we will be able to say that he did much less harm than good.