Over 16 years ago, a legend was born in the humble corridors of an American high school. Conceived from the minds of two absurd teens, The Trials of Kelvin and Isaac Reynolds was quietly unleashed upon an unsuspecting populace. Chronicling the exploits of two adolescent siblings and their momentous encounters with an array of baffling characters, this would-be novel began its existence on a single creased sheet of lined notebook paper. Now the story has found new life on your electronic reader of choice: 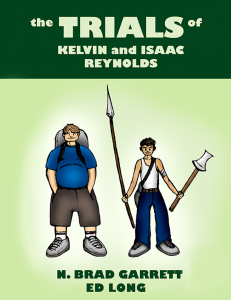 In my earlier days, I was one of those two young authors, never imagining our hastily illustrated sketch would later become an actual book. I had a study hall period that year, leaving me plenty of time to pursue this zany endeavor with my cowriter. The two of us, along with a couple other friends, were known simply as “The Bench” by the rest of the student body. We filmed a bevy of sketch comedy bits, threw lunch trays like frisbees, rode plywood sleds down dry-land hills, and ate a surplus of Taco Bell. Indeed we were the resident iconoclasts, supplying intrigue to a high school in ample need of it.

Operating within this environment, two of us crafted the tale of the Reynolds brothers—the older one marginalized by his peers, the younger with a penchant for violence. During their journey they meet the telepathic muskrat ruler Converse, his arch-rival King Rat, the tree-dwelling crazy man Divit, the human Transformer called Vogley, and his heavily made-up companion Kahndee Koahrn. These, along with many others, provide valuable learning experiences for the two lads, or more likely, opportunities for random and mystifying hijinks.

The story has held up surprisingly well over time, and is perhaps more relevant than ever today. Considering the current proliferation of fantasy stories and films, The Trials provides a much-needed yet subtle parody on the genre itself, featuring such hallmarks as inexplicable new powers, a fetch quest, an ultimate weapon, coincidental revelations, a legendary object of great worth, an inordinate concentration on food and sleep, and the arrival of tertiary characters whenever the authors run out of ideas. Yet even with all of this, the novel maintains a fairly brisk pace, and the brothers just might garner your sympathy by story’s end. Won’t you give them a chance to hack ‘n’ slash their way into your heart this very day?