The waves of joy sweeping through Grant Park in Chicago underlined the history of the moment. And despite the fact that I voted for the other candidate, I still feel an indescribable and somewhat unexpected rush of pride and excitement, probably because so many thoughts of my past and my country’s past shot straight to the forefront of my mind. Barack Obama has accomplished something which only too recently was considered unfathomable. He is the first black President of the United States. 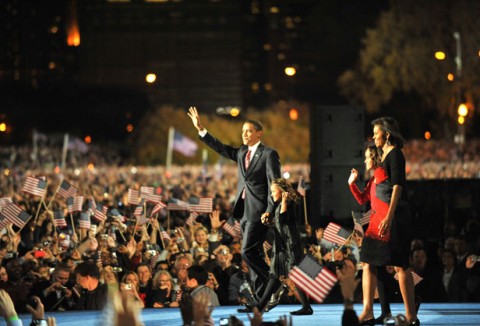 When I was five years old, my family moved to Frankfurt, Germany. I was an Army brat who attended kindergarten at the military base where we lived, and I distinctly remember having an ethnically diverse group of friends. The famous axiom that kids are color blind could not have been more aptly reflected in the schools, both public and private, and my church in Frankfurt. I truly believe that my own attitudes about race were largely formed in this wonderful place. I have nothing but positive memories of my three years in Germany—yes, even the times I needed stitches after any of my patented recreational injuries. When my parents, my recently born sister and I flew back to the states, we settled near Fort Polk in Louisiana. Once again I found myself in a fairly diverse environment. My elementary school was named after George Washington Carver and was located on a street named after Martin Luther King, Jr. My next-door neighbor, who was one of my best friends and a little league baseball teammate, was Hispanic, and I never thought twice about it. It wasn’t until we moved to Ripley, Tennessee, before my fifth grade year that I started to understand something about racial prejudice in this country.

Ripley itself was racially mixed, with an especially heavy black population. The three years I spent there shed new light on the deep-seeded racism that was still prevalent in the U.S. and particularly the south. Most of my extended family on both parents’ sides lived in this area, and through them I could witness the attitudes held by so many. Most of them lived through a time when segregation was still in effect and the civil rights movement was necessarily exposing its gross injustice. Even now I find it incredibly hard to believe that such battles had to be fought and won so recently in this nation. And I continue to feel strong emotions when considering the struggle, perhaps due to a childhood spent blissfully unaware of racial conflict and a profound sense of indignation when eventually faced with its existence.

My mom has told me a bit about those times of desegregation at Ripley High School. Those first few black students faced a firestorm of attention and often hatred from the rest of the student body and the surrounding community. Their situation was representative of what was happening in small towns all throughout the south. I can hardly imagine what those experiences must have been like for anyone living through them, whether black or white. But I do know that resentment was still harbored by both sides decades after the fact—I saw it firsthand. Several relatives of mine, all of whom I yet love dearly, used the word “nigger” routinely. Sometimes it was hostile, sometimes it was simply habit, but I could never stand it. I even called out my grandfather about it once—you can imagine how some outspoken kid fared against a grizzled farmer and World War II veteran during this showdown. He sternly assured me that he was too set in his ways to think about changing now. But through the ensuing years I could see the man’s heart soften. He was jovial and friendly with several black people, so I began to realize that I had merely been seeing and hearing remnants of a culture that was drawing to a close, an old southern way of thinking that seemed shocking to my generation but was mostly just residue from the bombastic civil rights revolution of the 1960’s. I also saw the bitterness of certain members of the black population, though not as personally. Some wore their intense hatred and distrust plainly on their faces, a tragic but almost inevitable result of being treated as less than human for far too long.

So my parents basically grew up during segregation, and their generation bore the responsibility of moving our society forward in the aftermath. Not all of them succeeded, but I think many more did. When my dad joined the Navy and later the Army, he and my mom were thrust into an environment of diversity and comraderie that I am forever thankful to have been born into. Meanwhile towns like Ripley dot the south, and they are still trying to shake off the last vestiges of the old ways of thinking. Obama’s election might be one of the final acts needed to complete our emergence from that past. Though I chose not to vote for him because of our disagreements on social and economic policies, I can still readily appreciate what his victory means for the United States and the world. The impact of this moment in history is bound to be pivotal. Already I can walk the streets in my town and see brighter countenances on the faces of those who lived to see a fellow minority finally fulfill that sacred “dream” of the civil rights movement. Our nation faces definite challenges in the years ahead, and time will be the ultimate judge of our next President, but there is much to be optimistic about. The least any of us can do is reflect on how far we have come as a society and strive to improve our lot even further as we take our next steps. I might even humbly and controversially submit, fully realizing the disparity of viewpoints on the matter, that abortion is the next major human rights issue for our civilization to reexamine.