The last ten years have been retired. Time for a fresh start.

If I could adequately describe the last couple of weeks, the theme would be new beginnings. And there is an odd but unmistakable parallel between these events and the overarching themes of my existence. 2008 has by far been the most eventful and exciting year of my life so far—perhaps just as much joy as sorrow until the forces of good staged a final-month rally that could make it all worthwhile. But I should remind myself that the year’s not done yet.

I’ve already written about my new job and the fateful road trips. Normally I would provide links, but all you need to do is check the posts from this past year. In a nutshell, I have visited Seattle, New York City, and Washington, D.C. in addition to the family-related trips to Tennessee and Ohio. I have changed jobs. I have moved thrice. I have been asked by good friends to take part in three weddings. I have had my heart broken and cried myself to sleep several times, but I have emerged much more self-assured from the experience. I have a renewed sense of God’s grace, perhaps testing the limits of Christian liberty but knowing that the quest for Truth allows me to pursue real happiness. I have been to the highest mountain in the lower 48. I ate the best meal of my life at the Metropolitan Grill. I have walked peacefully alone through the streets of our nation’s capital at night. I have established new friendships that probably rescued me from turmoil. Oh yeah, and I crashed my car.

Let’s go ahead and talk about this last one. I drove “back home” to Tennessee during Thanksgiving weekend, spent a wonderful time with family, ate my fill of delicious recipes mostly prepared by my grandmother, and spent a randomly brief afternoon on Beale Street where I chatted it up with two homeless guys. Eventually I embarked on the journey back to Greenville, and this is where my car became a symbol for my year. Right outside of Knoxville, the rain began to come down steadily, and interstate traffic, which was coasting downhill, came to a complete standstill. I applied the brakes, started skidding, tried a couple of times to pump the pedal to gain friction, failed, and ran into a Jeep that also bumped into a car in front of it. State trooper arrives, takes notes, gives me a ticket, yadda yadda. My hood bowed upward, my grill was smashed in a little, but I was still able to drive four miles to the next exit, where I called in my insurance claim. I surveyed the engine compartment, noted that it seemed to be structurally sound, and decided to attempt the remaining leg of my trip. Alas, somewhere in the “Great Smokies” now shrouded in darkness, I suddenly glimpsed the dispiriting sight of a “great smoke” spewing out of the right side of my engine. I knew I was in trouble and pulled off to the side, hazard lights engaged.

Fortunately for me, another car pulled in right behind me. Out stepped three of America’s finest—a group of young military enlistees, none of whom could have been older than 20. They offered me a ride to the nearest sign of civilization, so I gladly accepted. 15 minutes later we were in Asheville. I had them drop me off near an Ingles, where I proceeded to call my pal Sigs to come pick me up. Since it would take him about an hour to get there, I scouted for a better facility and located a mall across the highway. When I got there, the whole thing was closed for the evening, including the attached sports bar, which was nonetheless broadcasting an NFL game on multiple TVs. It was not even 9:00, so I was a bit disappointed with the scenario. I scanned my surroundings again, and there it was—that oasis of down-home hospitality known simply as Waffle House. I entered, sat down, ordered coffee, and began to watch Youtube videos on my iPhone for the next half-hour. Soon enough my ride arrived, and I was transported back to my house, apparently still in one piece. 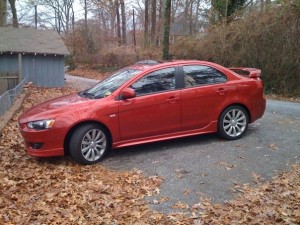 Now comes the fun part of the story. I was already in the process of moving from the crappiest digs you could ever hope for and into a new apartment, so I obviously needed to move a bunch of belongings from point A to point B. I also needed to get to and from work, but luckily Sigs works close by so he drove me there and back the next few days. However I was still in a fix, and I had finally received word that my car was indeed totaled. Long story short, I had to rent a car for a few days just so I could visit some dealerships for a replacement, and I test drove a Mazda6 and a Ford Fusion. I was initially considering a truck, but was reminded of the greater ride comfort and gas mileage of cars. I looked into several used cars as well, but started to get scared off by horror stories of repair costs on the heels of unassuming purchases. I was almost ready to buy the Mazda after getting three dealerships involved and bargaining the price down quite a lot. But something didn’t feel right.

I then checked out some reviews for the compact car segment, and got excited about the 2009 Mitsubishi Lancer GTS, especially since I could get one tricked out for the price of the lower-end Mazda6. I took a test drive on Saturday, and it just so happened that the one in stock with my requested features was red, my favorite color. The karma was good. I loved how it handled, was impressed with the seamless shifting of the innovative CVT transmission, and was duly floored by the 650-watt sound system. So I informed the salesman of the offer I made for the Mazda and asked him to match it if possible. The final cost ended up just a little bit higher, but still well below invoice for the model and with a nice interest rate. This is the third car I have owned, and all of them have been Mitsubishi models. It’s a complete coincidence, but I think it shows that they have an excellent balance of value and performance. My 2000 Galant survived 182,000 miles over nearly ten years, and I never had to pay for anything other than routine maintenance. I said I would drive it until it fell apart, but I wasn’t really planning on being responsible for its demise.

This whole vehicle episode ended up reminding me of my life in general—sometimes it’s necessary to make a change. I was forced to be proactive about it just as I was with my recent job search. Other aspects of my life have and will continue to follow suit. I’m hoping beyond hope that 2009 can be own private Pax Romana.