How did I get here? Where was I going? All around me were lights, and the sounds of tires rolling swiftly over rain-slicked roads. Miles of train tracks stretched underneath me and into the distance. What time was it? The sky was all dark, vague clouds visible. Buildings surrounded me, each one higher than the next, the skyline morphing with every half mile I walked. Aimless in an enormous city. Lost in my own thoughts. But free. 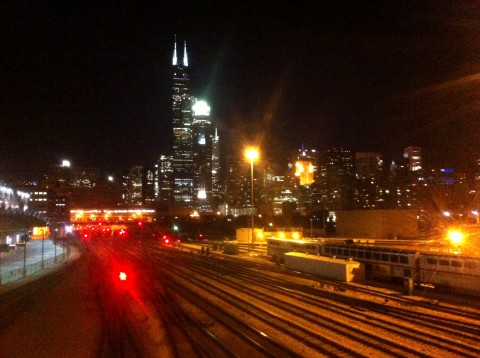 A week or two earlier, I was sitting on the living room floor in my sister’s home with my niece Ella. “You play with me, Uncle Bwad! You play with me!” she commanded. I readily consented, of course. We dumped out a large pile of blocks and built whatever we could imagine—a castle perhaps, or a parking garage. I loved to see her enjoying our construction project as much as I enjoyed my own during those earliest childhood years. The process of bringing the most grandiose plans to life was topped only by the sense of accomplishment that followed.

Spending a week in Toledo with family was a welcome interim to my summer’s journey. My sister and my brother-in-law were terrific hosts, and my two nieces (the newest, Emily, was born not three months prior) provided entertainment aplenty. The four of them, despite the occasional customary weeping of the two-year-old, hummed along with impressive efficiency. I couldn’t help but try to picture myself in such a scene of domestic tranquility. The thought seemed foreign, even comedic. Countless issues and circumstances in my own life have conspired to banish these notions of normalcy. Indeed my wandering the country seemed to be either a search for even a hint of this kind of fulfillment, or a rebellion against its impossibility.

This time I did things the right way. Compared to Boston, Chicago offered significantly better living and parking arrangements, thanks to my improved efforts and impressive luck. Airbnb yielded a fantastic room in an apartment complex right outside the Loop. My host and his girlfriend were recent UIC graduates from China who would be returning there shortly, but not before welcoming me to their adopted American city. They gave me free tickets to various museums, and even treated me one evening to Peking Duck at their favorite restaurant. They both had thick enough accents that communication was sometimes a challenge, but we were still able to enjoy conversations about our respective countries and, more importantly, the NBA. (Get ready for Linsanity in Houston.) 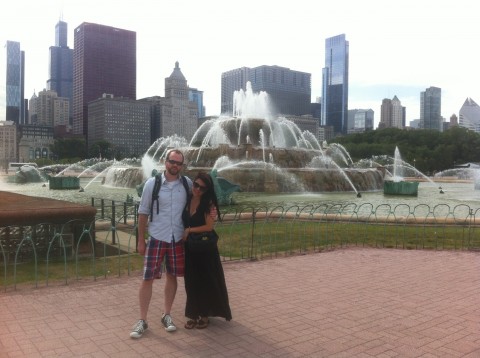 I spent many days and nights in this colossal city seeing as much as I could see. The Museum of Science and Industry and its captured German U-boat constituted an early successful field trip. Token visits to deep-dish pizza specialists were a top priority: Lou Malnati’s, Giordano’s, and especially Pequod’s revolutionized my taste buds. And several other establishments set new benchmarks in Mexican, Korean, and Italian cuisine. I made it to Wrigley Field for a Cubs game. I saw a comedy/music show with a new-found friend. And I marveled at the eccentric architecture all around me at every turn. But these endeavors don’t tell half the story of the Chicago I discovered.

Midway through my stay, I received a call from my buddy Tom in Philly. He had just endured a week fraught with girl problems and felt like getting out of town. So he randomly flew to Chicago, and we met up. After obligatory pit stops for pizza and smoothies, we decided to do a Loop tour and hit some highlights. First stop: Willis (formerly Sears) Tower. The line was long, maybe too long. Someone announced that the wait time would be over an hour and a half. We considered exiting right then, but others made their decisions more quickly and the line thinned out considerably. Next thing we knew, we had moved way ahead, and a few moments later we noticed a couple of intriguing tourists directly ahead of us.

Fast forward a few hours, and we had just spent a rollicking good time with our new friends Roxy (from Romania) and Debbie (from Brazil), not only experiencing those famous views of Chicago from above, but learning a thing or three about each other and the adventures that brought us to this iconic place. I may have even picked up some salty vocabulary that might get me slapped or arrested if I ever end up in Romania. Roxy and I got along famously from the get-go—any girl who wears Minnie Mouse ears for no particular reason is bound to be a kindred spirit of mine. Add an eastern European accent to that mix, and we have lift off. We made arrangements to meet up the next day, which resulted in an unforgettable foray through downtown’s best landmarks and shops. We sang, we danced, we ate froyo, we chased birds—we simply had an excellent time together. Like me, Roxy was destined to be in Chicago for only a few more days, and we would soon part ways, but what a happy coincidence that two people could meet at precisely a time and place seemingly ordained by the universe.

I suppose the rest of what I could say about Chicago is simply this: I started the summer full of uncertainty and restlessness, but I achieved a measure of serenity by the end. I had the chance to meet up a few times with my friend Matt, who had moved to the city about a year prior. The conversations we had were so amazing and beneficial to me that I’m still trying to appreciate their full significance. We both discovered that we had more in common than either of us ever realized, and that both of us are still essentially searching for a certain layer of meaning that might connect our past experiences with our present hopes. For my own part, I feel a fresh empowerment to continue, and someday complete, that quest.