First, an announcement: Merge has allowed me to begin penning entries for our blog. My role at the outset is that of culinary critic, but food is a favorite topic of mine, so fun times will surely be had by all. And on the subject of food, I have even more to offer. 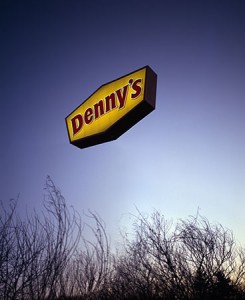 You may remember that during a recent foot-ball match on television Denny’s advertised free food if you showed up at one of their locations the following Tuesday. A few friends and I took them up on this fine offer but assumed a perfunctory wait in line was all but certain. Fortunately it didn’t take us long to meet Bruce, whom one of our party properly referenced later as a true urban philosopher. Bruce was a forty-something-year-old black guy who immediately initiated a conversation that centered around rock music hits of the 1970’s. And he found like minds in the two white ladies ahead of us, who were also well-versed in the specifics of the subject. My friends and I were able to keep up pretty well, our frequent sessions of Rock Band finally paying off in a real-world application. However, it didn’t take long for Bruce to revoke my “white man’s card” for admitting that I hate the Eagles. I was disappointed but assured in the knowledge that I’m not the only one who shares this sentiment. You may wonder how a black man (or “cinnamon” as he would prefer you think of him) has the authority to issue such a verdict, but I learned later that his favorite group of all time is Genesis, so that should sufficiently answer that question.

There is so much to tell about our time in line—the pop quiz about Freddy Mercury surely stands out. We were to guess from where Queen’s front man hailed, and Bruce assured us that if we just “look around” we would have our answer. It took about a half a second for us to realize he was referring to the three individuals who likely hailed from India—they were in line right behind us. After trying to be coy and deflect the situation, Bruce loudly reprimanded us for not guessing “India, man! I told you the answer’s right in front of you!” I’m pretty sure those folks didn’t speak English and that there would have been no harm in our simply replying “India,” but the situation was too weird to process correctly at the time—I blame the complimentary “pancake puppies” that were handed out once we entered the restaurant proper.

We ended up sitting at the same table as our three new friends, and it was filled with too many comedic moments and trivial music nuggets to remember. Maybe Dave and Tom can shed some light in the comments? Ah well, the event was one we shall remember for perpetuity. And I am pleased to report I reacquired my “white man’s card” near the end of our meal when I admitted to an equal appreciation for both U2 and Rage Against the Machine for their ability to challenge our thinking while having obviously distinctive styles and philosophies. Then I snarfed down a final mouthful of bacon and pancakes, content with my life and quietly acknowledging the ingenious maneuver by Denny’s to bring disparate Americans together by way of a free and tasty breakfast.