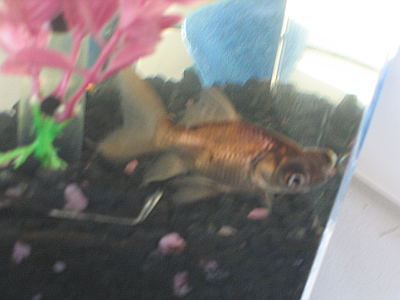 E Pluribus Unum, or E. Plurb for short, was snuffed out overnight. Yesterday he had been as giddy as ever, shotputting himself throughout his waterlogged homestead with characteristic gusto. Today he was positioned sideways near the bottom of his refuge, frozen in a majestic pose as if he had thrusted himself to “the other side” readily. My sister had given him to me before she and her husband began their long trek to Toledo. Gleaning that the fish (whom she had named Franco) seemed ill-equipped for such a voyage, she allowed me to assume ownership. Soon afterwards, with the assistance of Ben and Ben, he received his new name in honor of his characteristic eyeballs, which reminded us of the pyramid eyeball on a dollar bill.

For several months thereafter E. Plurb lived life vigorously, chomping his goldfish pellets with a sense of purpose and only rarely pausing in quiet contemplation near the top corner of his abode. So today we see him off. I know not the cause of his expiration—my personal feeling is that either he choked on his food or suffered a heart attack due to hyperactivity—but I do know that BigBlueHat‘s mascot will not soon be forgotten.