Something interesting happened near the end of last year. I started taking improv classes. 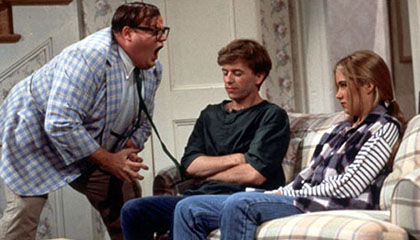 Alas I am now back, doing what I do 10th best (rough estimate). As an Alchemy player, I have had a blast getting on stage with hilarious people and making audiences pass out from laughter (also a rough estimate). But we must always maintain a keen awareness of history—the history of sketch comedy at its best. It is with this reverent attitude that some fellow Alchemists and I recently held our first annual Sketch Comedian Fantasy Draft.

Such an undertaking should not be taken lightly. Well, actually it totally should. But the ground rules were that each comedian had to have written or performed regularly on a televised sketch comedy show. We employed the snake draft method (wherein the draft order is reversed each round) to ensure optimum fairness. Here are the final rosters of our seven teams, with overall pick numbers in parentheses and my team in bold.

The draft elicited more than its fair share of analysis, kudos, and head-scratching. As solid as our first round picks were, one can certainly call into question such picks as Justin Timberlake, Conan O’Brien, and Horatio Sanz (each for different reasons). These technicalities are due to the fact that each performer was graded on their overall career efforts, not only for the sketch show that qualified them for the draft. (The fact that Sanz was drafted at all, however, can be attributed to the fact that his owner was unable to come up with a pick of his own.)

Our draft results were later submitted to an impartial third-party judging panel (named “Ben”) who decided that the strongest roster was—wait for it—MINE. Join me as I wallow in victory, and feel free to provide your own critiques of our teams. We are well aware of some of the high-profile funny people who are still in the free agent pool, such as Carol Burnett, Martin Short, Julia Sweeney, Chris Elliott, Ben Stiller, and the unclaimed Kids in the Hall. But hey, we did pretty well considering nobody had a cheat sheet—which, when you think about it, is in the true spirit of improv.