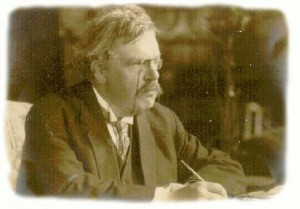 There we were, all seven of us, discussing the salient points of G. K. Chesterton’s The Everlasting Man—the distinctions between mythology and philosophy, or the motivation of a soldier during war, or how strange the life of Christ must have appeared to an outside observer. And before the evening was done, we found ourselves debating matters more tenuously connected to the book at hand—the merits (and shortfalls) of Catholicism, or why the American revolution succeeded where others had failed, or the importance of stewardship and ethics in agriculture. It was just the sort of exchange of ideas we were hoping for when the plan for “The Applebiters” was hatched only a couple of months earlier. Some clues to our purpose may be found in the original email I sent out for it:

Do you remember the joy of a puffy pan pizza as your ultimate reward for a personal dedication to reading? Then you remember Book It! The edible bonus was of course secondary to the personal enrichment you must have felt after blazing through such classics as “Superfudge” and “Five Children and It.”

Recently it has become apparent to me that we would do well to recapture the spirit of this bygone era by establishing such a stimulating reading programme for the upcoming year. I have run this idea by a few of you already, and I’d be honored for as many people as possible to take part. Essentially I would like to establish an agenda of reading 12 books over a 12 month period, and holding a meeting each month for discussion and general merriment—so yeah, a Book Club. At the end of the 12 months, we could then decide if we want to “renew the contract.”

But the big thing is keeping it informal. These are just ideas, and mostly I want it to be dang fun. And I want it to be low-pressure. Don’t feel the need to read every page of every book if you don’t want. Pick out the parts that seem intriguing and be on your way. I want this to be something we will be quite glad we did when we look back on it.

Drawing obvious inspiration from The Inklings of Oxford, the goal for our group was similarly informal and straightforward. And thanks to the recommendations I received from the others, we began with arguably the best possible selection by reading Chesterton’s famous work, which was even regarded by C. S. Lewis as a chief inspiration for his own thoughts on Christianity and history.

Chesterton is the sort of witty and enthusiastic writer that anyone would do well to emulate, even if you don’t agree with his philosophy. For my own part, I can’t say that it was so persuasive that it changed my mind forever about any one thing, but I must agree that its stated mission was accomplished. Written in response to H. G. Wells’ The Outline of History, the book aimed mainly to demonstrate just how unique is this religion called Christianity—how it cannot be subject to simple studies in comparative religion because of the special claims it makes, and how Christ himself must not be merely admired as a capable moral teacher when he balanced those teachings with specific proclamations about his deity and his life’s purpose for all of humanity. It is a convincing case, and the author chooses to make his point by framing man’s entire history around those outrageous events in the Roman Empire two millennia ago, when mythology and philosophy were finally joined, and the course of history truly changed drastically. Jesus spoke aptly indeed when he said, “Heaven and earth will pass away, but my words will not pass away.”

It is not my place to convince anyone reading a summary blog post of anything contained in the book, so I would merely encourage each individual to read it for yourself, as you are at least guaranteed to be entertained by such a sweeping look at the world’s past. And from so grand a starting point as this tome, any reader could then springboard to any number of subjects. For The Applebiters, we’ve got our big sticks ready for this month’s entry, The Rise of Theodore Roosevelt.