Those are the words I mostly remember from Doug, our next door neighbor.

He rode around in a golf cart. He’d suffered a stroke several years prior and couldn’t possess a standard driver’s license. So he would occasionally travel up and down our street in that golf cart. I remember him always wearing blue. Blue pants, a blue shirt, and a blue baseball cap. He couldn’t say much more than those few basic words.

At that point in my life, I was just getting acclimated to a new environment. We moved to middle Tennessee—Dickson to be exact—maybe a year or so earlier. I was starting ninth grade. We had just moved into this new house, and already had a couple of new dogs. Jake. The hound dog. My dad loved Jake. And I did too. My mom and sister were a bit less enthusiastic about this raw, emotional animal. But he was the proper symbol of our family at that time. Loving, trusting, not much worry for the future. 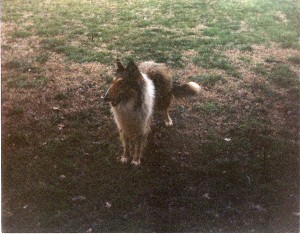 I don’t remember exactly why Jake didn’t last. All I know is that within a year, the old hound dog was replaced by a docile collie named Trix. The most timid, but most gentle, dog I’ve ever known. All I wanted to do was pet her every time I saw her. Her face was always pure innocence. Lassie was the obvious comparison. But there was an inexplicable depth in her eyes. Like she had been treated unfairly before she became part of our world.

Among all these new experiences, I also noticed the relationship between my dad and the next door neighbor, Doug. I could never understand his mutterings. I just saw him ride over every once in a while in that golf cart. Who knows how long he lived in the little house next door, unable to really bond with anyone because of his speech impediment? But my dad, for some reason I might never know, made a concerted effort to connect with him. I would sometimes see them together when I walked out into the back yard. Often they would be holding beer cans in their hands and laughing.

I was such a different person then, but I remember exactly who that person was. Obsessed with video games—Final Fantasy and Street Fighter especially—but also part of a burgeoning group of iconoclasts at school. A group informally named “The Bench” because of where we sat each morning when we arrived at Dickson County High School. I look back on that time and still marvel at our comedic genius. I’m not afraid to state it thusly, because the four of us so perfectly balanced each other’s tendencies.

We would meet up from time to time and film these utterly silly comedy skits. I’ve reflected on those times frequently and truly believe we could have pursued comedy as a “serious” endeavor if we’d really wanted to, or had the guidance. If only one of those four personalities had not been present, the whole thing would have fallen apart. We were known at our high school for being a bit bizarre and for our unsolicited commentary on passersby. But what nobody knew was that we were twice as hard on ourselves—we ridiculed each other mercilessly. It was this heightened interplay of give and take that raised each of us to new heights. 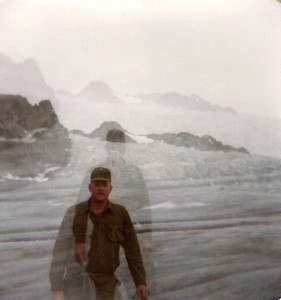 No matter how hard I tried to laugh off the world around me, however, I still had to come face to face with stark realities. At some point, we moved away from that house, away from that street. I’ll never know the emotional impact that may have had on my dad or Doug. I look back on it now and think that may have been the last true friendship for both. My dad was somehow able to decipher whatever gibberish came out of Doug’s mouth. And Doug always seemed eager to ride over in his golf cart and strike up one of these mysterious conversations with my dad.

Not too long after we moved, my dad died in an automobile accident. I don’t remember if Doug showed up to the funeral, but I like to think he was there, if only in spirit. There could be no greater symbol of the extent of my dad’s love and respect for all of humanity, than that man. Just a guy in a dark blue baseball cap, slowly riding down the street in a plain white golf cart, paying a visit to the one human being who made an effort to understand him.

I feel as if I am nowhere near my dad as a human being, despite his faults. He had a drinking problem, yes. But I remember him lavishing me with love and attention during his time here on Earth. He was an extraordinary presence, and a complicated one. His friendship with Doug—who otherwise was an outcast of society—is something I will spend the rest of my life trying to understand. But the one thing I do know is that my dad’s heart was giant, and full of empathy. If I can tap into that only occasionally, I will have lived up to his legacy.