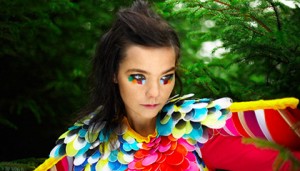 Bradezone has been revamped, Battles has released a brand new album, and summer is in the air. The time is indeed ripe for an extension to last year’s mammoth mix tape. A primary inspiration for this latest endeavor is the inimitable Bjork, to whom I tragically avoided listening for far too long. While I’ll never truly understand the cause of this delay, the important thing is that it has been rectified. And rather than pull a George Lucas and “tweak” my now-legendary playlist to include the Icelandic sensation, I resolved to produce an all-new selection of musical wonderment, especially since I’ve been introduced to several other top-caliber artists in the interim. Not only that, but many long-time favorites are now represented as well, and I believe fate has decreed they fit all the more perfectly into the present mix.

Just like last year, my rules are simple: no artist or album can be represented twice, and all the songs must be able to fit on one CD, even if that CD never gets burned. This discipline has resulted in a very carefully crafted final product, one that I invite you to enjoy.