If there are any fans of Charlie Sheen left, they probably work for Apple. The 300-billion-dollar tech behemoth would be only too pleased to see someone else on the receiving end of public furor these days. But I for one shall not allow some meth-addled celebrity to quell my indignation over their recently announced 30% App Store subscription fee. 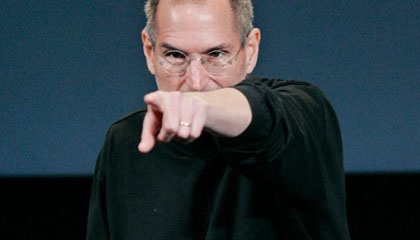 Since that momentous announcement, reaction has poured in from just about every website and media outlet imaginable, so much so that there might be nothing further to add. However, ceasing discussion of this issue would be a complacent resignation in the face of an increasingly overbearing corporate power. The fact is that Apple is treading into the same waters that so many powerful firms before them have entered, and there is no reason to think their hubris won’t elicit the same public backlash that thwarted their predecessors’ ambitions. Apple has become a classic example of the Big Brother they mocked in 1984–a company who specializes in closed systems and believes they know what is best for you every step of the way.

You can read more about the specifics and implications of Apple’s new policy in the back and forth between Seth Godin and John Gruber (who does a spot-on O’Brien imitation). You can read Ryan Carson’s heartfelt denouncement, which details precisely how small businesses would be extorted. You can also read how Apple’s closed App Store platform eventually deterred 37 Signals from developing for it, so they could instead launch their mobile app on the still wide-open platform of the web. These are all inevitable reactions to Apple’s overt attempts to control a major media outlet.

Closed systems in and of themselves are not good or evil. The billion-dollar video game industry has thrived with proprietary consoles from Nintendo, Sony and Microsoft. But there is a drastic difference between the consumption of games and the consumption of content and information. If this discussion only concerned the likes of Angry Birds and Cut the Rope, there would be mild irritation. But when the subject of consideration is the essential exchange of information, which heretofore has flourished under the freely accessible infrastructure of the world wide web, the tone of the argument changes dramatically. There will be a torrent of anger indeed, and it won’t just come from the birds.

NOTE: This post originally appeared on the Merge blog.