I recently watched a nifty show on the MLB Network in which Bob Costas interviewed various umpires about the idiosyncracies of their job. And of course, there was no shortage of highlights featuring bombastic managers laying into the men in blue for their perceived failings. This got me thinking about such things as the 1991 World Series and the 1997 NLCS, both marked by crucial umpiring shenanigans that prevented my team from winning the whole ball of wax—a ball of wax that eluded the Braves on yet another occasion in 1999, at which time I spilled forth my resulting angst in writing. Here now is this classic essay. 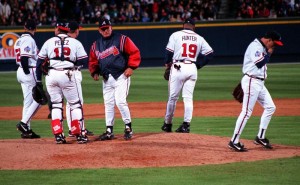 So close, yet so tragically far away

I recently endured one of the most cathartic, heart-wrenching, emotionally taxing experiences in my entire life. I am of course referring to the 1999 World Series, wherein my beloved Atlanta Braves delivered one of the great pathetic performances in sports history. Why do I allow them to tear at my very soul with their clumsy and uninspired playing style during their most critical match-up of the year? The answer, my vassals, requires a stroll down memory lane.

It was the best of times, it was the worst of times. More specifically, it was 1987. I had just survived a three-year vacation in Germany. I say “survived” because I somehow lived through a variety of life-threatening injuries, such as completing a 360-degree back flip off a playground swing and slicing my lip open on the concrete below. I also endured a series of high-speed bicycle wrecks, which involved my attempts at advanced trickery on my “freestyle” machine of greatness. I would love to speak more of my vaunted Huffy, but this story is about the Braves, so stop interrupting me!

Anyway, in 1987 my family settled in the culturally intriguing state of Louisiana and made a key purchase once we moved into our new home: Cable TV. This was quite a change from the channel selection overseas, which included a grand total of one channel—the Armed Forces Network, which I recall showed plenty of WKRP in Cincinnati reruns in addition to the Mutual of Omaha nature show. So as you can tell, I was more than elated with our all-new cable system. Among the many stations available was WTBS, which televised the professional baseball matches of the Atlanta Braves. At this time, I became absorbed in the various aspects of baseball culture: I played little league, I collected cards, I impersonated star players during heated wiffle-ball competition between my next-door neighbor and myself. Also, I purchased a jock strap. I say all of that to say this: I loved the Braves, specifically their power-hitting right fielder, Dale Murphy. I had my team, I had my hero. I was set. Except for the fact that the Braves were a horrendous team during the late 80’s. Yes, I was scoffed at by my peers, who were fiercely loyal to their respective teams, namely whatever team was in first place that year. I know you are shocked to find out that most people change their favorite team from year to year, but it’s true. So I was basically the lone Braves fan outside of Georgia until 1991, when they miraculously finished first and began an unprecedented streak of success lasting the entire decade.

I should mention that the Braves traded my hero, The Murph, to the Phillies the year before their run to the World Series. Thus I harbored some significant feelings of resentment that season, even though I was beyond gleeful when the Braves accomplished the impossible—they were in the World Series! It was with much anxiety and trepidation (Can someone tell me what that means?) that I intently watched each chapter of this riveting saga, and it would all come down to Game 7. Without drudging up any long-buried and painful memories, suffice it to say that the Minnesota Twinkies prevailed via a valiant and courageous effort that involved high levels of cheating. I was deflated, muttering under my breath, “If they hadn’t traded Murph…”

Throughout the decade the Braves continued to win abundantly, but when they reached the playoffs, the thing was a crapshoot. Their lone championship came in 1995, otherwise known as the greatest year in world history. Well, maybe not, but how glorious it was! My team, the team that used to be Dale Murphy and a bunch of would-be plumbers, the Braves had finally won it all. John Smoltz and Tom Glavine were my link back to the old days, but the rest of the players were all-new and all-talented. Guys like Dave Justice, Marquis Grissom, Greg Maddux, and Chipper Jones constituted the new-look Braves, and suddenly everyone was on the bandwagon. Like any other gracious and welcoming life-long fan, I wanted to bop each new fan on the head with my aluminum Easton and tell them to get away from my team. But I learned to put up with this type of mindless, leech-like fandom.

I would later learn to cherish this World Series victory all the more, because the remainder of the decade was filled with heart-breaking collapses during the most important games. The 1996 Series is still such an aberration that I now consider my memory of it to be a side effect of my wisdom tooth removal surgery.

The Braves were not even featured in the next two World Series. 1997, as we all know, was the year of The World Series That Absolutely No One Cared About Or Acknowledged. I believe NBC promoted it this way, which explains why it was the lowest rated championship since that obscure contest in 1616 between the Jamestowne Scurvy Survivors and the Atlantis Fame, thusly named because of their well-known city slogan, “Fame—we’re gonna live forever!” The victors in both the 1616 and 1997 World Series have long since been forgotten. Curiously enough, if you add together the individual numbers in these years, you get 40, which is also the name of a popular style of alcoholic beverage. Coincidence? You wish.

At any rate, the 1998 Series was equally pointless, featuring a match-up akin to a game of chess between the IBM Deep Blue and Bubbles the Chimp. I believe the New York Spankies may have been the first team to win a World Series game via the Mercy Rule.

The stage was set in 1999, then, for a titanic clash between Atlanta and New York which would decide the Team of the Decade. At least that is what Sportscenter told me, so I was geared up for the games. Well, consider my transmission officially stripped. The Atlanta Braves displayed all the talent of a box of toothpicks in this World Series. In fact, I am calling for a government probe into the possibility that the Spankies may have swapped the Braves’ bats with these toothpicks. Basically my team could not hit a ball, field a ball, or run the bases with anything resembling skill. The pitching was spectacularly mediocre, and the entire squad seemed as if they were stricken with Fred McGriff Syndrome. This is the syndrome whereby a player will put forth the absolute minimal level of effort towards playing baseball. Don’t get me wrong, I am a huge fan of McGriff, but generally speaking, any given team can only afford to have one such lackadaisical player on the roster at a time. Therefore the 1999 Braves doomed themselves from the start, while New York did everything right. They achieved key strikeouts, key home runs, key base running, key defensive plays, and the keys to the Atlanta clubhouse, allowing them to purloin key statistical data that we were hoping to exploit against them.

Being the gracious and sportsmanlike baseball fan that I am, I will admit that the Spankies swept my Braves in the World Series only because we were without three of our best players, namely Andres Gallarraga, Javy Lopez, and Kerry Lightenberg. So don’t think for one minute, New York, that you actually accomplished anything special. Let’s see how well your team plays without Rivera, Martinez, and Leyritz, you noony-heads.

Whew. Anyway, my opinion is that we could have avoided a lot of post-season disappointment by hiring Dale Murphy as the hitting coach immediately after his playing career ended. Have you ever heard of the Curse of the Bambino? Well, I’ll have you know that the Babe and the Murph both wore number 3 on their jerseys. That sounds pretty peculiar to me. Let’s not take after the Red Sox. Let’s nip this problem in the bud.

I also want to remind the Braves franchise that my wiffle-ball skills are second to none.